Most people simply change the channel if they don’t like what’s on TV.

Nashville’s newest music-related shopping destination – Toys In The Attic & Music City Pickers – has bona fide proof that the King of Rock ‘n Roll had little tolerance for bad television. Of the many historical musical artifacts and vintage instruments on display and for sale this week during Toys In The Attic/Music City Pickers’ Grand Opening Celebration is a 19” Zenith color television that Elvis personally destroyed by putting a .38 caliber bullet through its screen.

Why? Pretty simple … because The King didn’t like what was on TV! 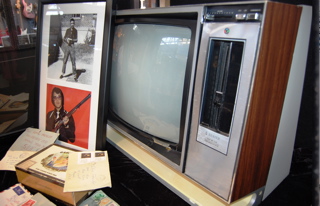 “Elvis was watching the Mike Douglas show one day, and actor Robert Goulet was one of the guests,” explained Stephen Shutts, longtime collector and appraiser of musical artifacts and owner of Toys In The Attic. “Apparently, he didn’t like the interview, so he grabbed for a handgun from the TV tray next to him and took a shot at the TV, which immediately lost power.”

Shutts recently acquired the television from Letetia “Tish” Henley, who was Elvis’ personal nurse. According to Henley (whose last name is now Henley-Kirk), the “shooting” took place inside the bedroom of Elvis’ daughter, Lisa Marie Presley. And apparently it was not an isolated incident.

“Elvis instructed Tish to tell her then-husband Tommy, who also worked at Graceland, to take the television to the ‘TV graveyard,’” Shutts said. “But before trashing the set, Tommy plugged it in and realized that it still worked. Elvis was amazed that he hadn’t ‘killed’ the TV and gave it to the Henleys to take home for their daughters.”

The “TV killed by Elvis” – bullet possibly still inside the set – is just one of the many historical musical artifacts and vintage instruments on display at one of the most distinct retail experiences to hit Nashville in quite some time. The combined shops – Toys In The Attic and Music City Pickers – are the brainchild of country music superstar Brady Seals, former Gibson® Guitars’ web editor Gabe Hernandez, and Shutts, who each share a passion for preserving important pieces of musical history.

This week’s Grand Opening Celebration not only marks the launch of Nashville’s newest destination for the buying, selling and consignment of vintage musical instruments and all types of music memorabilia, but also culminates with a gala event on Saturday, April 14, beginning at 5 pm.  It promises to be a night full of surprises – including the possibility of a very special late-night jam session by Seals and several of his artist and musician friends.

The Music City Pickers’ side of the store features an exclusive and ever-changing selection of vintage and newer, high-end musical instruments, including guitars, basses, amps and effects. It also features instruments from some of the area’s finest custom builders of guitars – both acoustic and electric. Among the treasures currently available are a rare 1961 Gibson Les Paul Custom and an all original 1957 Fender Stratocaster in MINT condition.

The Toys In The Attic side of the store offers a wide array of historical musical artifacts from genres ranging from rock and roll to blues to R&B, and – of course – bluegrass and country music, along with select musical merchandise and apparel. Some of the items available for sale at the opening this week include such rarities as an Elvis “TCB” (Takin’ Care of Business) Prototype Jacket; The Monkees unplayed board game from the 1960s; a personal tie worn by the legendary Hank Williams; and an extraordinary snowmobile replicating the infamous General Lee from The Dukes of Hazzard television show.

Additionally, Toys In The Attic will feature two exclusive collections of rare photographs taken by famed rock photographer Steve Gladstone, and longtime record producer Eddie Kramer – best known for his work with Led Zeppelin, The Beatles, Jimi Hendrix, The Rolling Stones, David Bowie, Peter Frampton, Santana and Kiss, among many, many others. The photographs feature some of the world’s best known musical legends at their absolute best – and lounging around without any inhibitions or reservations.  All of the photos will be professionally framed and available for purchase.

Based in Nashville, Tennessee, Music City Pickers is the creation of country music superstar Brady Seals (of Little Texas and Hot Apple Pie fame) and former Gibson® Guitars’ web editor Gabe Hernandez. Seals – who has sold more than 11 million records and has had two Grammy nominations – and Hernandez have set out to make Music City Pickers Nashville’s No. 1 trading destination for the buying, selling and consignment of fretted musical instruments. They specialize in vintage acoustic and electric guitars, basses, mandolins, resonators and banjos, but also vintage amplifiers, electronic pianos and keyboards, old saxophones and trumpets, and newer, high-end instruments and accessories. Music City Pickers is also a convenient Music Row stop for musicians in need of instrument and amp repairs, as well as last-minute accessories they might need before their sessions.

About Toys In The Attic

Toys In The Attic is the creation of longtime collector and appraiser Stephen Shutts, who along with The Mavericks’ Robert Reynolds recently captured the attention of CMT with a reality show that documents their travels across America to find historical music memorabilia. The as-yet-untitled show is tentatively scheduled to debut on CMT later this year, and many of the artifacts found on the show will be available for purchase at Toys In The Attic, or Shutts’ other business location, The Rock-N-Roll Pit Stop, which is located on the grounds of The Loveless Cafe off Highway 100 just south of Nashville.

The Oak Ridge Boys Wrap Up Their Holiday Tour

December 28, 2010 Amanda News Comments Off on The Oak Ridge Boys Wrap Up Their Holiday Tour

The Oak Ridge Boys recently wrapped up their Christmas tour, The Boys Are Back Home For Christmas… […]

Legendary Drummers To Be Honored July 11

Three legendary drummers are scheduled to be honored during the World’s Fastest Drummers World Finals at the Music City Center on July 11. D.J. Fontana, […]